To continue with my journey through Mordheim, here are some pictures of some of Van Hoogen's "Greedy Wenches" conversions. 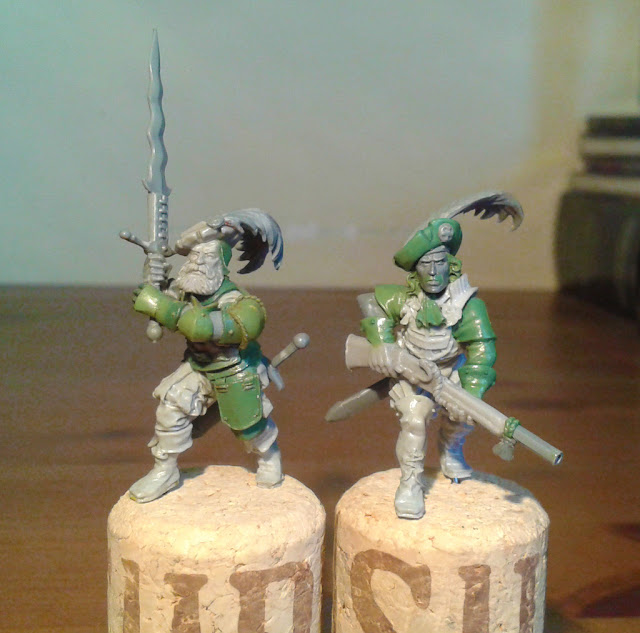 Let me introduce you to Peetar Ruggbroeder and Rijk Van Rijker, champions and minority shareholders of the Company of the Golden Mermaid. These were converted based on FW Manaan's blade and sold along with our good captain. 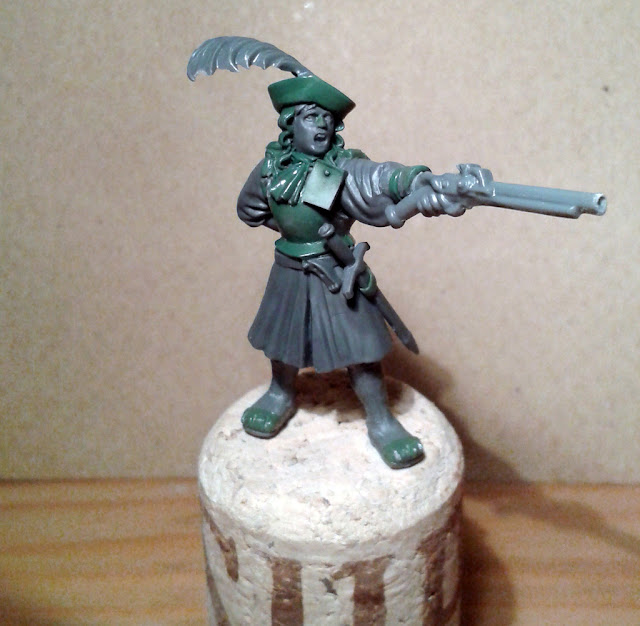 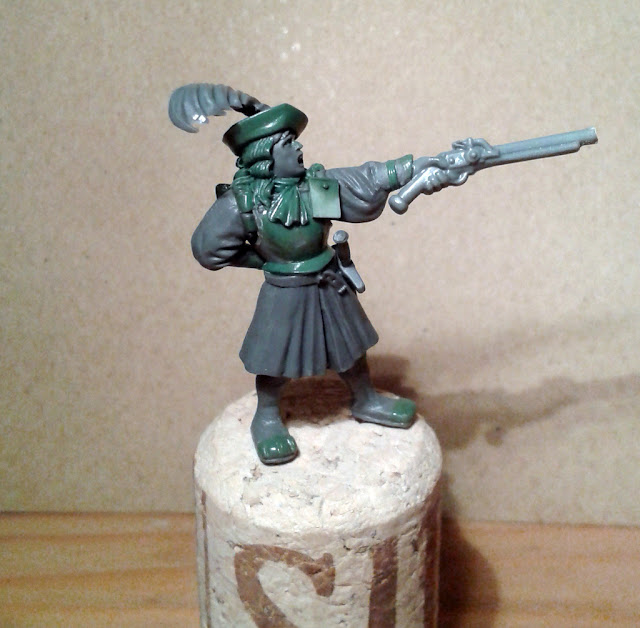 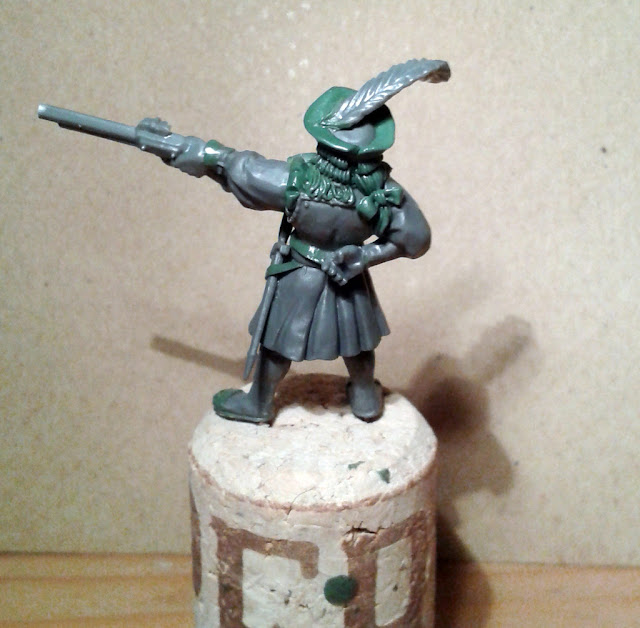 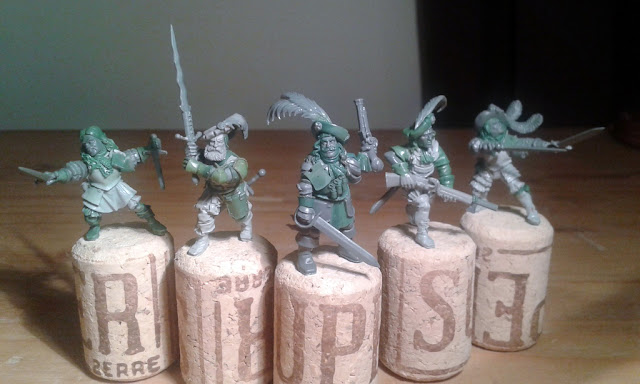 The band with two swordsmen (admittedly not very visible in the picture)... This really funny project drew great inspiration from a couple of movies villains, in particular the aforementioned Lord Bullington from Barry Lindon and the incredible Archibald Cunningham from Rob Roy... They were designed to push the stereotype of Marienburgers as "fops" even further that the official models, bringing in some aesthetic references to the XVII and XVIII centuries, like curly wigs, laces and a bit of extra pomposity. Can you imagine them painted with white-powdered faces and red cheeks that hide 5o'clock shades and rugged scars?  They would have been glorious!

Moving on to my second warband, this is the one I actually play (or will play as soon as I get to complete the scenarios for my table), meet the Reikwald's Wolves of Captain Metzger! 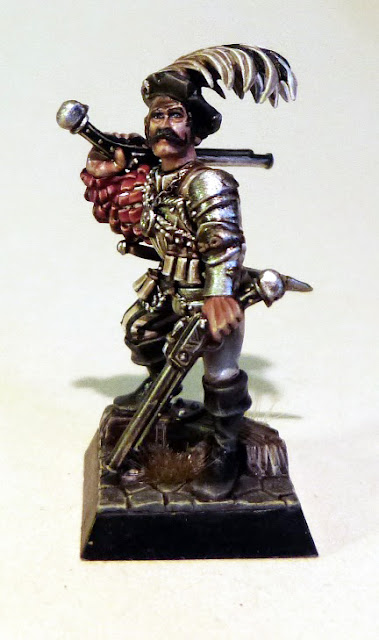 Captain Wilhelm "der Metzger" was inspired by another great movie villain... who can tell me which one? 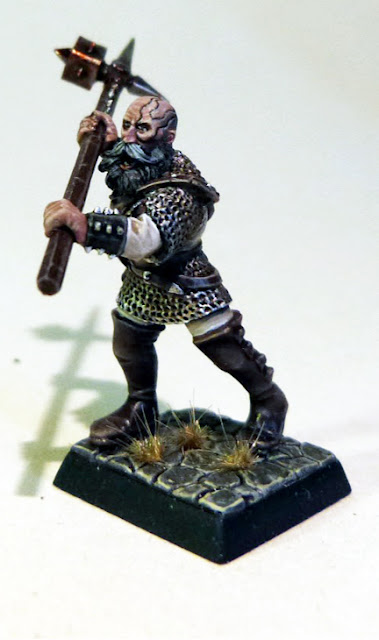 Sargent Krantz, the "Bear of Teufelbrück" is the muscles of the band, ready to break bones and smash spines. 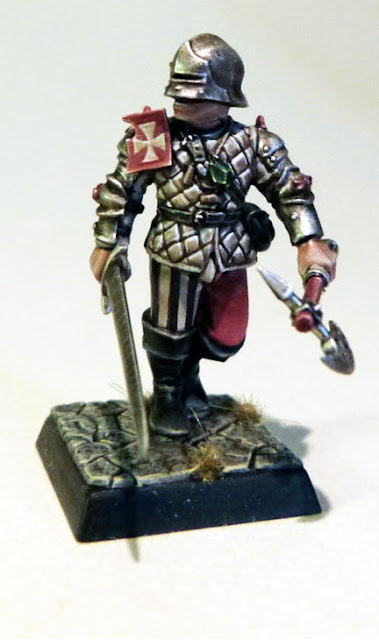 Archibald "Peacock", the greatest swordsman of the Reikwald Forest, a self-obsessed narcissist and lethal warrior. 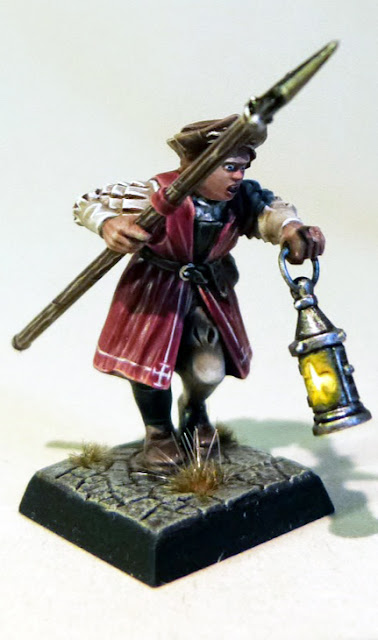 Dieter "Marineburg" the youngest of the wolves... Look at his terrified face! 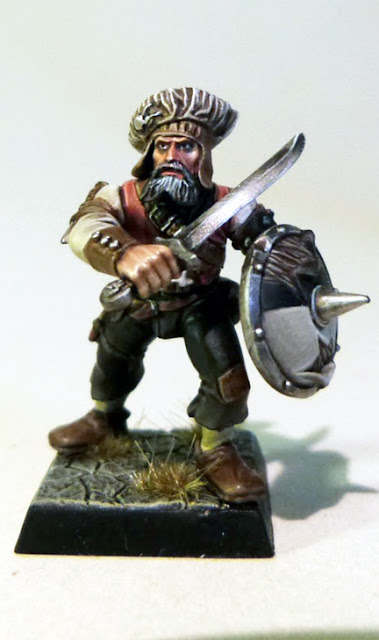 Ilja, kislevite swordsman and drinking champion of the warband... Not even Sargent Krants is a match for this tough old boot. 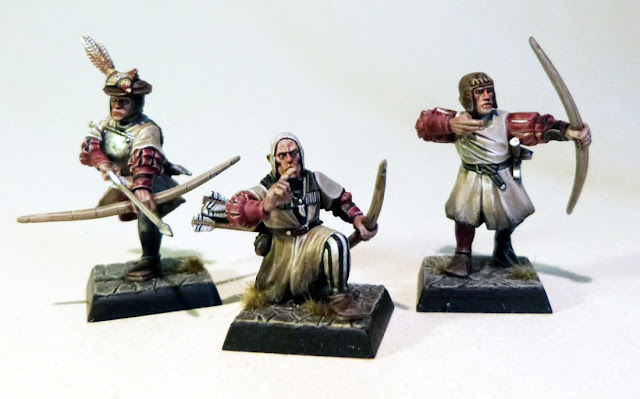 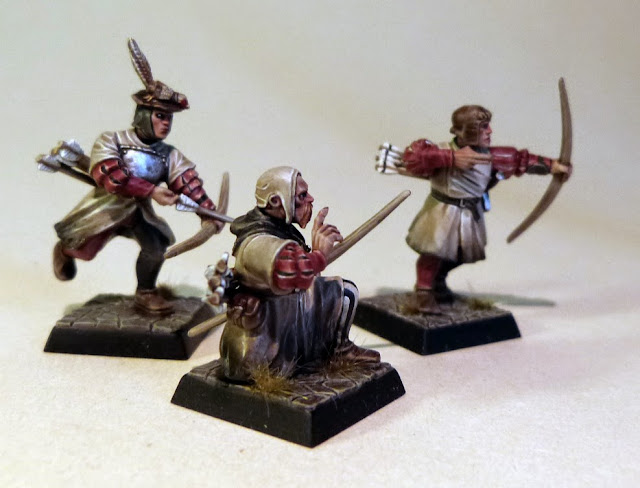 And finally the Reikwald Spectres, whose leader, Diebold Serck, was Jaegermeister of the Prince of Reikland Sigismund himself, before disgracing the daughter of a courtier and being exiled from the capital.

Blast form the past

While I am pleading mighty Chronos to grant me more time to finish some minis, I thought I could start sharing old projects that I never posted here on my blog. There will be more of these blast from the past articles in the future, so fasten your seat belts, here we go!
We start our serie with a warp travel back to the World-That-Was during the difficult times known as the Age of the Three Emperors to a certain eastern city of some renown...
Let me the introduce you to Jan Van Hoogen, captain of the Company of the Golden Mermaid. 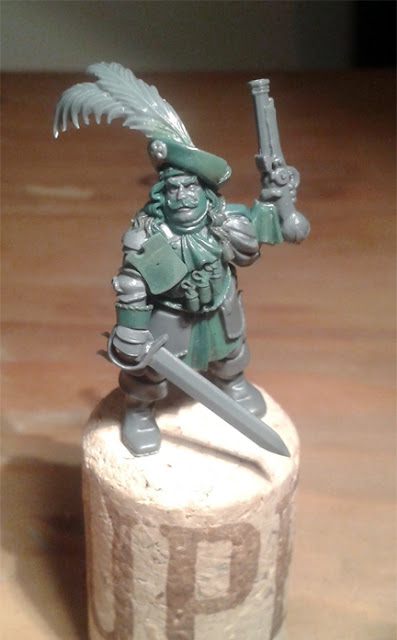 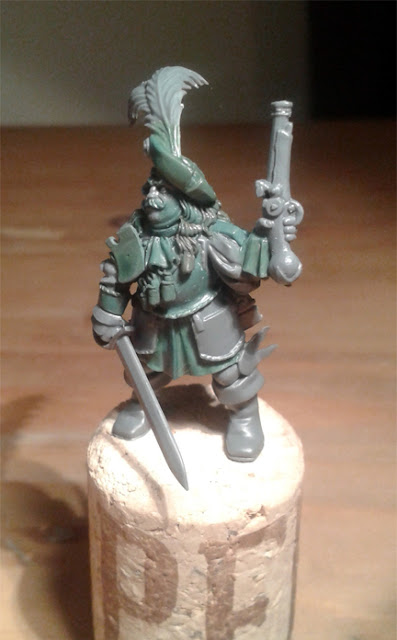 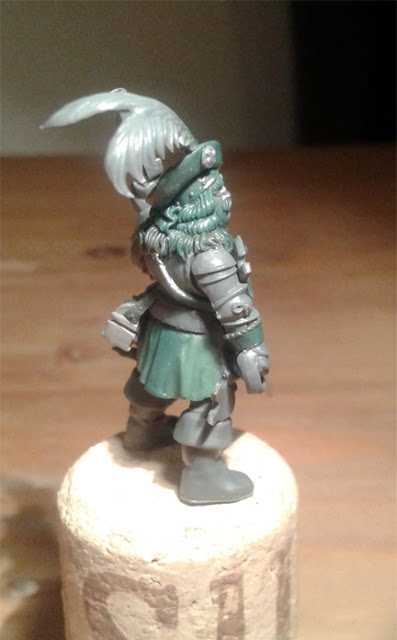 Jan started his life as Johan Hagensson, the eighth son a courtesan in Wurtbad. Aged twelve he was sold to a mercenary company, and during the next 25 years he fought his way to the higher ranks, finally becoming a condottiere and gaining an ill reputation during the civil wars of the Age of the Three Emperors, selling his services to whomever was paying better and never swearing allegiance to a single pretender. After years of battles and treacherous conduct he finally retired to Marienburg where he used his blood stained wealth to buy himself a place among the raising merchant guilds of the city. He had a plan to grow old and wealthy in Marienburg but after some years he bit off more then he could chew and got involved in financing a risky expedition to Lustria which went really bad and cost him almost all his money.
Desperate to recover his fortunes he realises he just have one chance left: going back to his previous life as a soldier, squeezing back in his old armour and using all the little money he has left to hire a small mercenary company contacting some of his old "loyal" comrades, murderous rapist all of them. He had heard of Mordheim and the magic stones which seems to be turning mad everybody in the Empire and decides a last good plunder might turn the wheel of fortune back in his favour.

So instead of a grizzled and muscular veteran he is now an old, embittered and greedy fat man, who's desperate for money and doesn't give a horse sh**t about the lives of his men and certainly not about the ones of their opponents. He's definitely not a chubby fellow you'd like to share a drink with down at the tavern!

Jan, along with te rest of the Greedy Wenches, was a commission project I finished last year for a client... As some of you might know, I am always very reluctant to accept commissions, and part of the reason is that I really put all myself into every character I create and not being able to see it finished and painted is still painful for me.

Dear Jan, wherever you are now I hope you are in good hands and got the paint job you deserved!

See you next time with another dive into my past hobby works. Or maybe even something new! 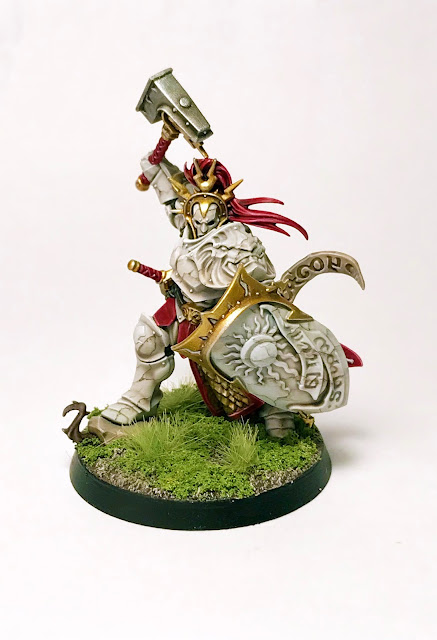 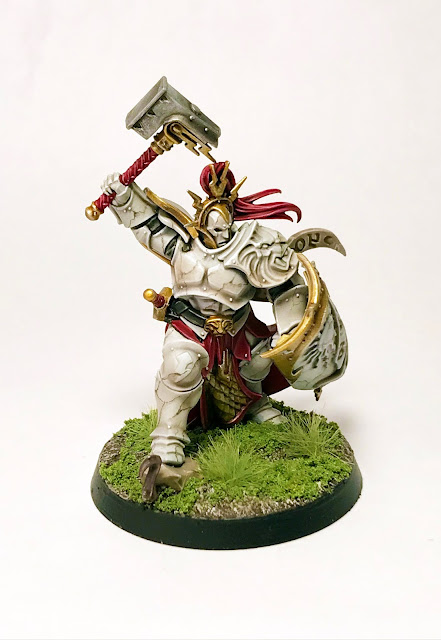 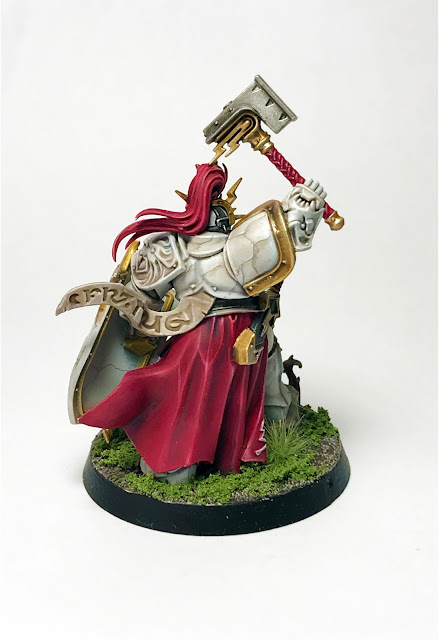 I am really ploughing on with the hobby lately! I found my mojo back and started going through my backlog of unfinished projects.
This is one of the three "easy to build" Liberators that I bought from GW a while ago to test my marble technique and its effectiveness in batch painting. This guy and his two companions were left unfinished for some three months on my desk but this sunday I decided it was time to give them the attentions they deserved. The other two should follow shortly after.
I am really satisfied of the colour scheme, so much so that I am seriously tempted to start a small Stormcast battalion for an army on parade or something similar...

Wrath of the Ancestors

Listen to the storm, young hunter
Do you hear the howl of the Wanderer King?
Can you hear his war cry shaking the very plains?
He is back to honour the Promise
And to tell us, his children
that we are not forgotten 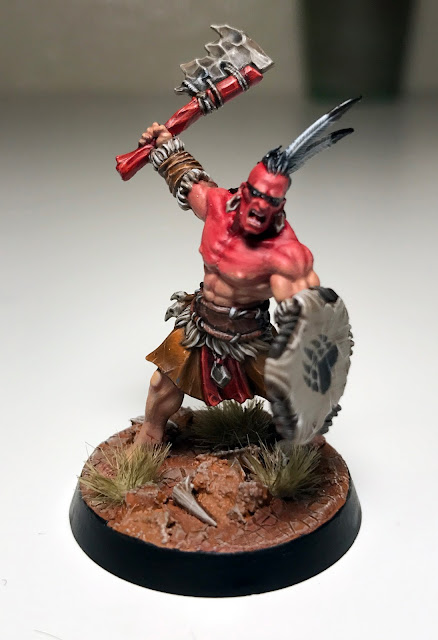 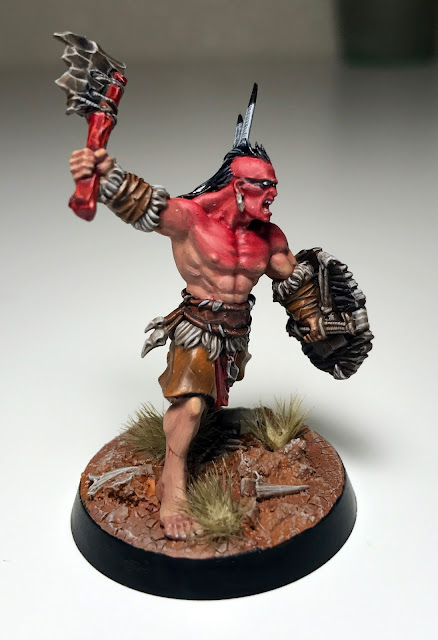 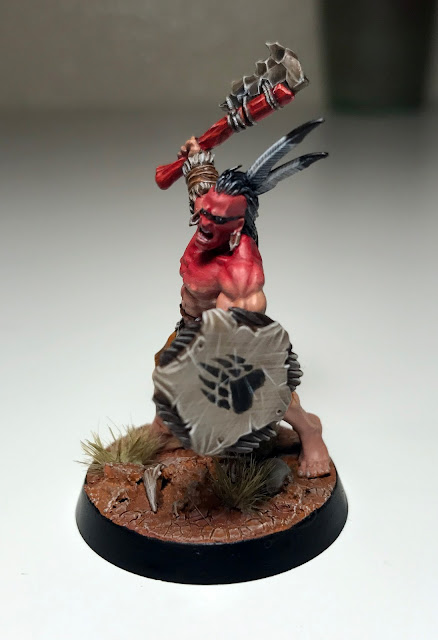 Haya! Another warrior of the tribes finished! We can consider this a new generation of Sons of Or, as I changed the bits for the conversion. When I started the Sons of Or the only half naked humans I could find were the Khorne Bloodreavers... But now, thanks to the Great Serpent (tzeentch) the new Kairic Acolytes kit proved just perfect for this project and really renewed my energy! Less cutting and filing, bare feet, no pants, they even have feathers and bird skulls... It's like the gw designers listen to my pleas and released the perfect ghurian kit!
Sorry for the bad pics... They always seem fine on my phone and then I upload them here and look all fuzzy. Oh well, you get the idea I hope.
In other news I am slowly going through my pile of unpainted models and just finished something nice this morning... pictures soon!

The few among you who are patient enough to follow my blog will know by now that I am not very regular with my posts... in fact I believe that it's more than three months since I posted anything on here! You are not interested in my excuses anyway, you come here for the models, so I thought I'd throw in a couple of Wip pics of what I am working on at the moment... The Alluminarchate warrior markIII (it's the third reinvention and hopefully the final one of the concept). 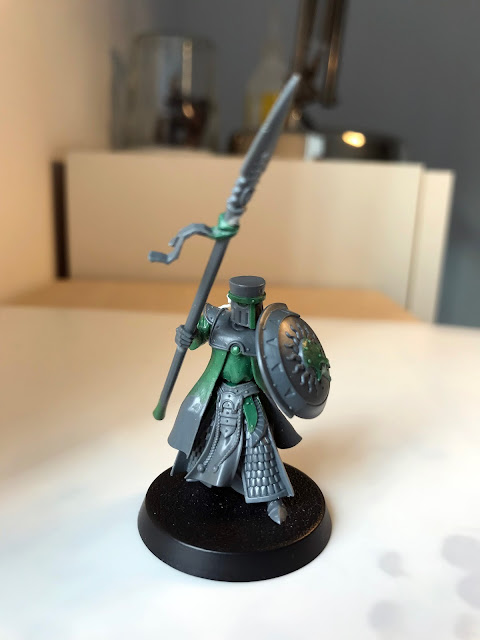 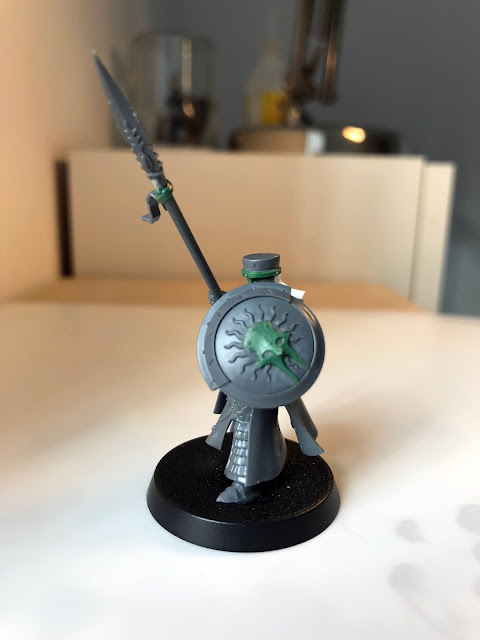 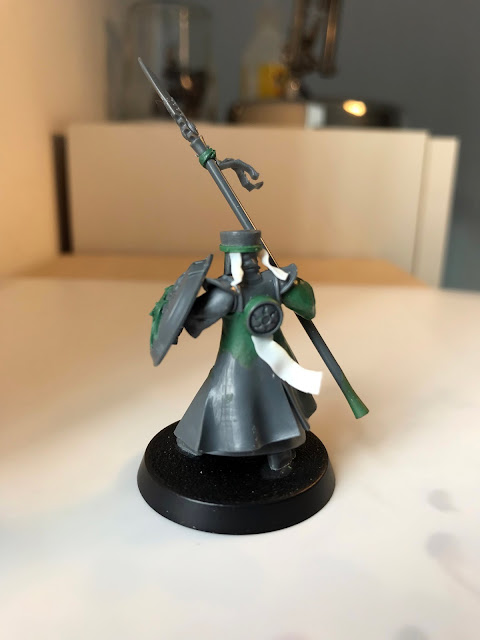 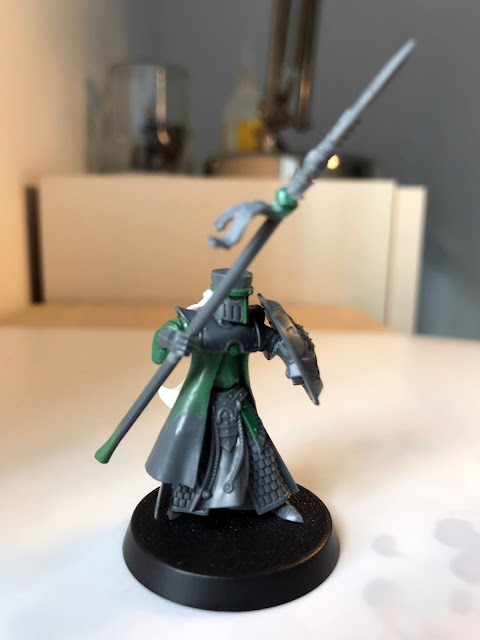 I am really sorry about the bad resolution of these, I am currently panting the model and will post the final result soon... Wips of the painting 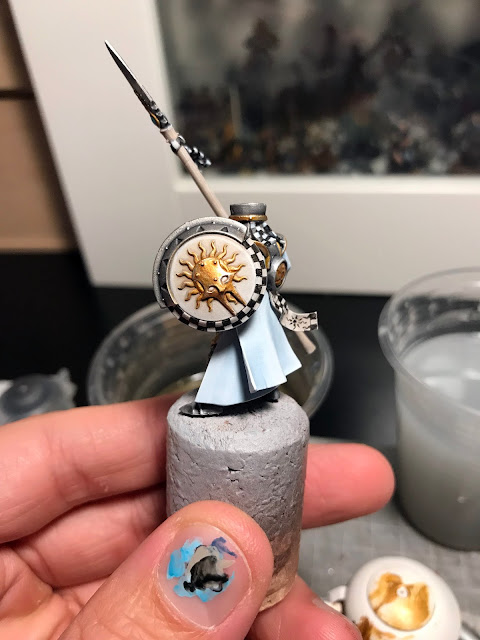 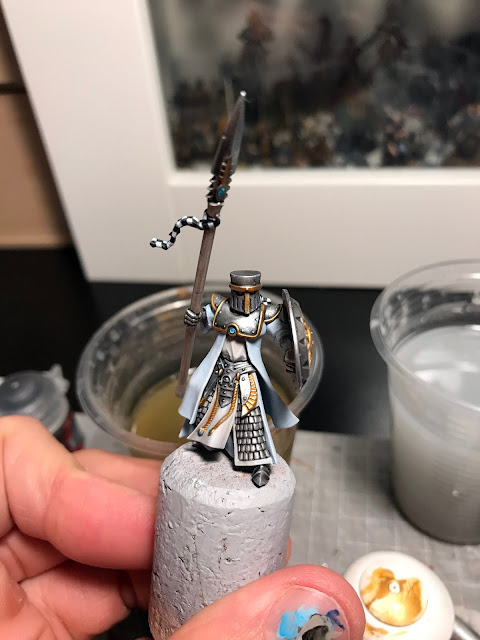 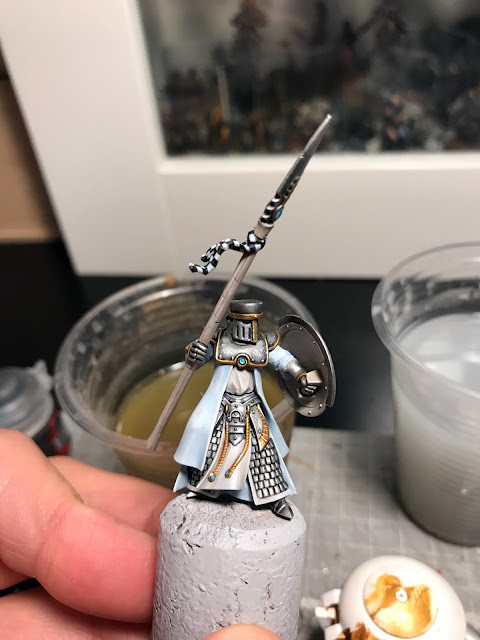 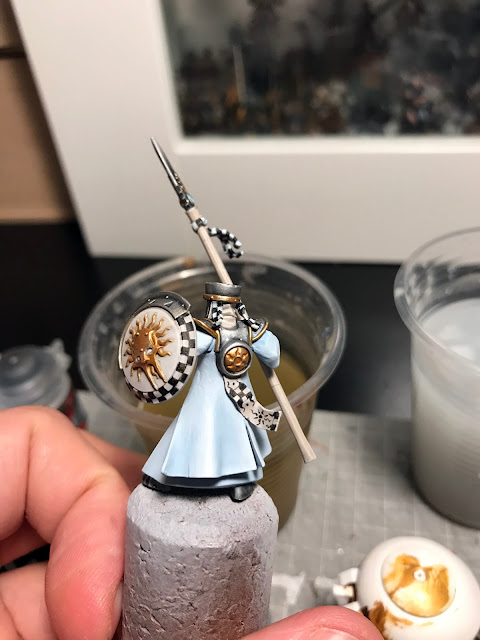 Still some finishing touches to apply and possibly some more details... The base will make the few colours pop out I hope (it worked with the previous colour scheme)... You will notice that I switched the colour on the armour from cream to metal. It works better this way I believe as it gives a slightly less futuristic look to it. I can promise that the metal looks better IRL and hopefully final pictures will show it!