Warriors of the Fifth Mystery 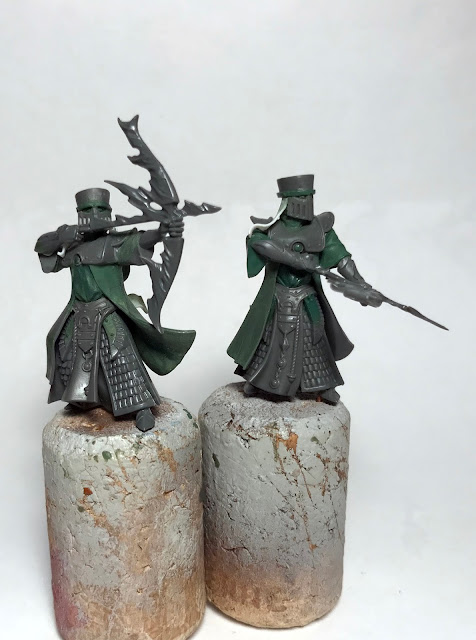 It was about time that I posted an actual update around here! I could go on to tell you all the usual stuff, how life is getting busier, work and responsibilities and bla bla bla, but you came here to loo at some toy soldiers so here you go, another couple of warriors for my Alluminarchate warband!

These two belong to the elite Fifth Circle, meaning that they disclosed the true meaning of five of the eight mysteries of Sehemaza and are only a few steps away from total enlightenment (though from here it doesn't get any easier and nobody, not even the Alluminarch himself have ever grasped the meaning of the eighth and final Mystery). The knowledge they possess and the deadly weapons they wield make these two types really dangerous, specially if you happen to have sworn allegiance to the Dark Gods. In game (if I ever get to play one) they will probably use the rules of the Sisters of Avelorn which I reckon should be quite deadly in a small game of Skirmish, wreaking havoc form afar and helping my brave warriors with some ballistic support. Apart from the flaming bows from the SoA kit the rest of the conversion is identical to the one already experimented on my other warrior that you can see below finally completed with a proper fluffy base to match his leader the Alluminarch. 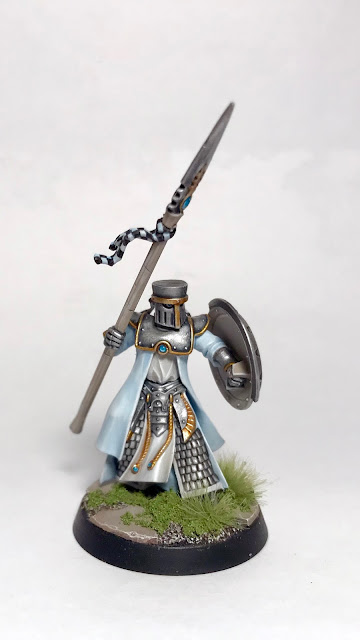 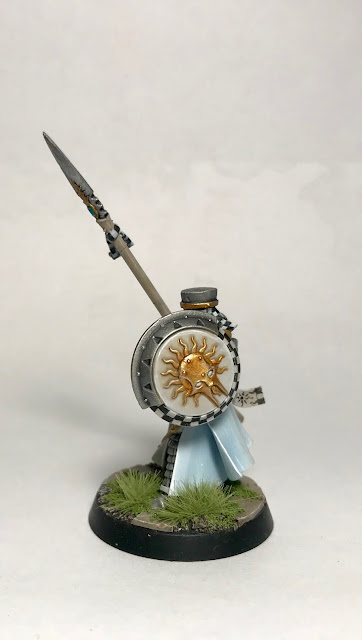 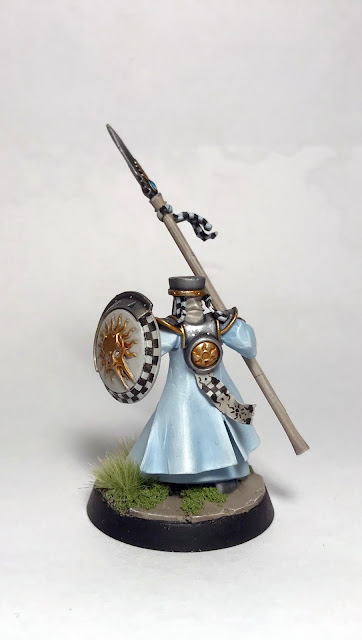 I am really happy with the final result on this mini, representing the third and hopefully final incarnation of this conversion that I was able to refine over the past months (actually it's almost one year since I came out with the concept of the Alluminarchate and I am still down to these three guys plus the leader... food for thoughts).

Again, for the ones among you who wants to know, the bits for this conversion come from a variety of both fantasy and 40k kits. Legs are from the HE Phoenix Guards with front armour and loincloth form the Sister of Silence 40k kit. The body is converted starting from the AdMech Skitarii Rangers with the top amor plate from the Ruststalkers Princeps. Shield and sun symbol are from the AoS Stormiest Knights Excelsiors (with resculpted parts to suit the war band's theme) and the head is a Bretonnian Men at Arms helmet with a SM Iron Armour MKIII faceplate from the Burning of Prospero box set. Arms are generally from the HE range with sculpted sleeves.

I would love to get to painting these quite soon but unfortunately I have other projects to work on and few hours that I can dedicate to it, so it might take some time before these guys see some Corax White.

As always, let me know your thoughts.

The Court of the Cannibal Knight

Here is a sketch of a project I might embark in the close future. Check this space for more details! 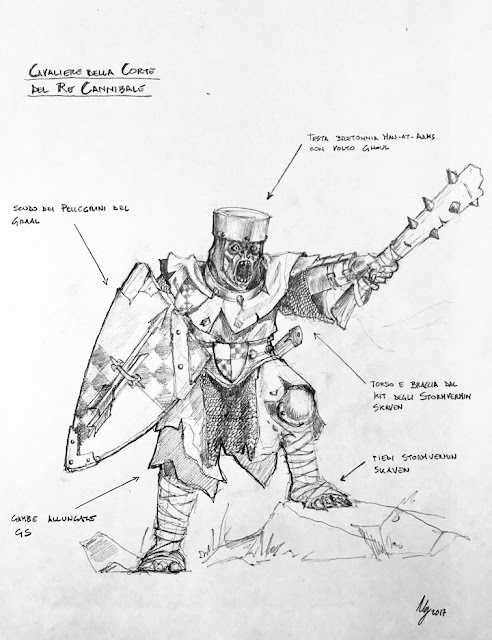