I managed to find some time to paint! Here is the result (still WIP) 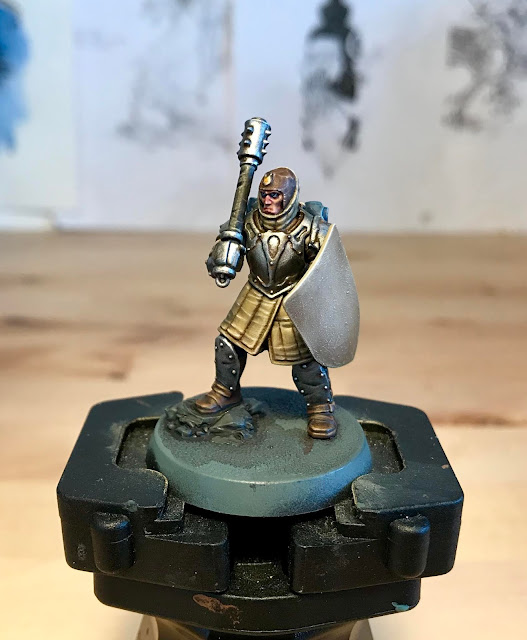 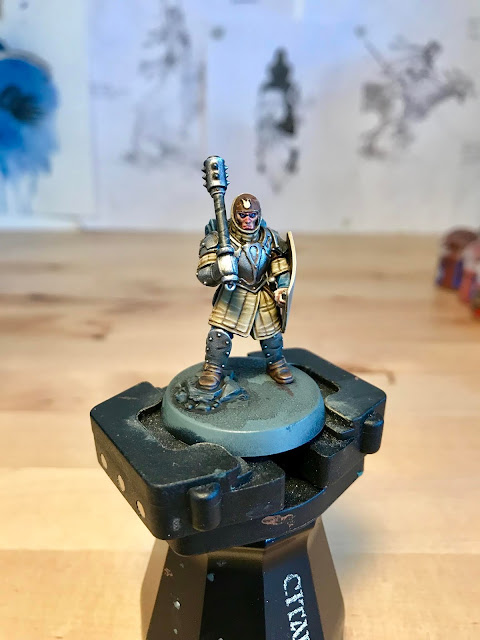 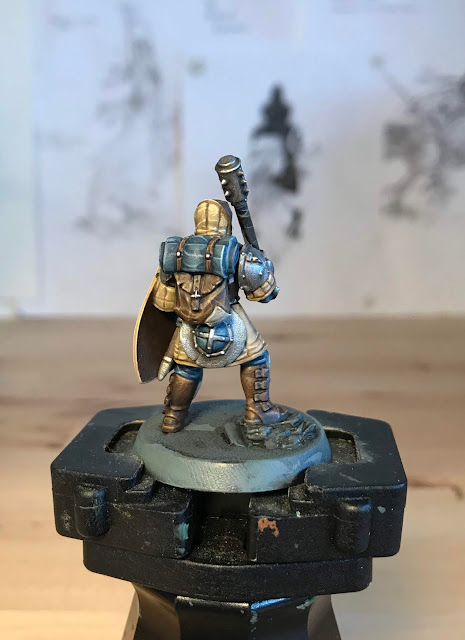 As you can see I decided to keep it really simple, which was the plan from the beginning. These are not  garish nomads or bizarre warlocks but no-nonsense fighters of the highlands. Their colour scheme should convey practicality and robustness, so I went for a very simple palette of cream, browns and dirty blue. For the metal I went for a very slight oxide tinge, obtained with multiple washes of Rhinox Hide and Mourning Brown.

It was very nice, easy and refreshing to paint a model in such a way, using many techniques developed in the past, especially on my old Bretonnian army.
The only part that doesn't photograph too well is the shield, where I used a very light drybrush that the light of my desk lamp make look a bit messy. I think in real life it looks better (and slightly yellower) than in the pictures.
Only heraldry and base to go now!

It's been another long while without updates, but I am back now (at least for a while) to show you what I have worked on recently. Very early stages at the moment but here goes the green of the first model of my new gang of the Realms. 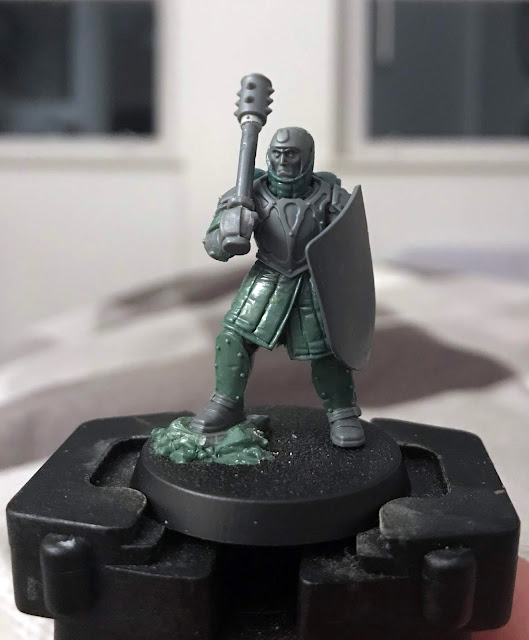 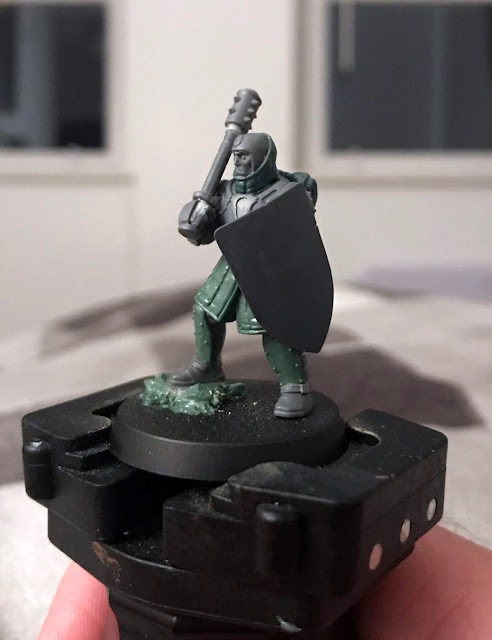 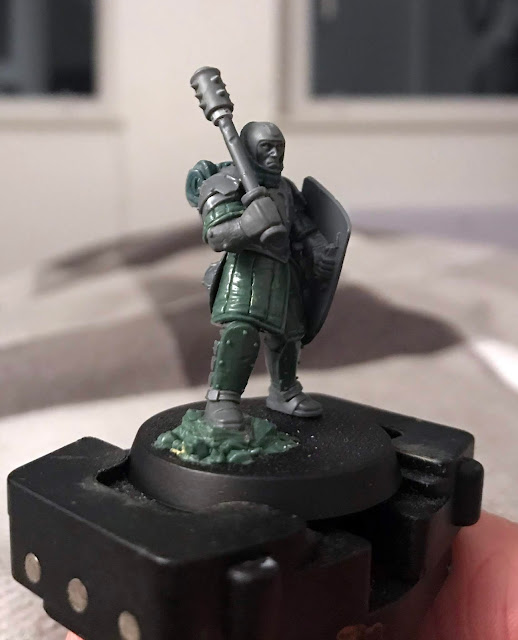 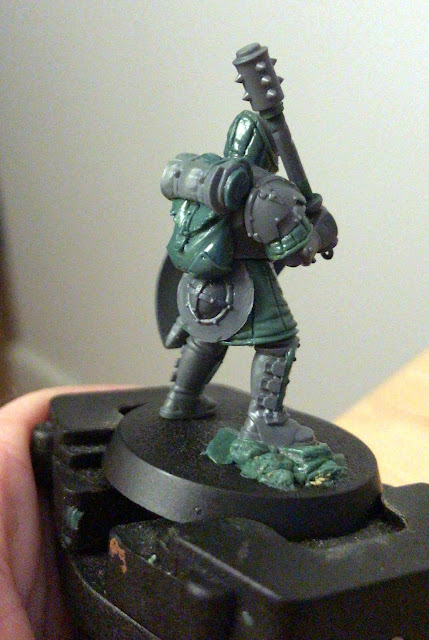 He is the first member of a new warband project I am currently working on called the Oaranium Ibex.

I have been wanting to create a warband hailing from Chamon, the Realm of Metal, for a while now. In the past I have been trying to convert something similar but all my attempts failed because of a lack of planning ahead of the conversion. This time I gave a lot more thought to what I was trying to achieve and what bits I would have used and this model, which is the first concept for the warband, is the result of these considerations.

The idea is to explore the aesthetic of the Realm of Chamon, a land imbued with the raw essence of the Wind of Metal and pulsating with alchemical powers. It seems that when people think of Chamon, they think of a steam powered fantasy setting, where the boundaries between magic and technology are blurred and where everyone owns at least a rifle and a pair of goggles.
Nothing wrong with Steampunk aesthetics to me, but I wanted to create something with a different feel that responded to the question "how do humans of the Realm of Metal look" without recurring to over-the-top clockwork technology.

This warrior belongs to the Oaranium Ibex, a regiment of armed guards specialised in escorting mining expeditions into the dangers of the Cold-iron Anvil.  This vast mountain chain to the north of Chamon is rich in the mineral called Oaranium, a combustible realmstone capable of powering entire civilisations across the Realms. The Anvil is a very hard place though, full of Ironjaws tribes and the mutated remains of the fools who roamed too close to the realm edge. The Oaranium Guild pays well to ensure the protection of the brave pioneers who are willing to venture into those misty heights and the Ibex are one of the  regiments of mercenaries that specialised in mobile warfare and protection of the mineral caravans. 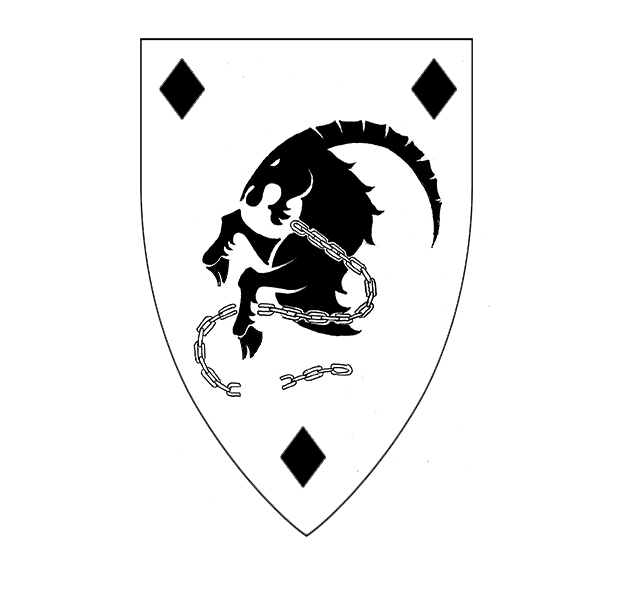 Symbol of the Oaranium Ibex

So that is the general idea: a sort of Klondike pioneers guild of the Mortal Realms. In addition to the soldiers, I am planning to convert a couple of miners, an itinerant blacksmith, a Duardin mountain guide and possibly a wizard/alchemist and an warrior/engineer of the Oaranium Guild to lead them.

Painted updates of the test model to follow, hopefully soon.