The time of Fulfilment is nigh...
In the fire lit darkness of the Cave of the Alderans ancient petroglyphs tell the Tale of the Forgotten Days, the legend of the fall of the Kingdoms of the Uplands and the First Migration to the Plains. The inscriptions tell of how the Great Father was forced to abandon His children and bow to the might of the Snake, but before leaving He swore the Ancient Promise, that He would have come back and guide the faithfuls to victory and vengeance.
For untold generations the shamans and Boneseers of the tribes have searched the sky for a sign of the Father's return but the power of the snake has always remained ascendant and the Sons of Or suffered and struggled deprived of even the faintest hope.
Then came the Wandering King, Orar they called him, He who comes from the Father, and he released them from their bounds and returned them their pride and faith in the Promise. He came from the Father's kingdom, he told them, and those who will answer his call to war on the Fulfilment's Day, will be invited to come back to Or-Athor with him and will finally see their Ancestors avenged and their enemies choke in blood.
Now powerful storms have descended on the Plains raging as never before. Howling winds blows from the North and the West, beyond the Great Bonewall, and the spirits of the Ancestors grow restless on the Uplands. The Signs have been seen, the Nadrigens have been interrogated and Shamans of the Tribes declared that the Last Great Hunt should begin under the Eye of the Warrior.
Feeling the time for forgiveness finally close at hand, the Wandering King has returned to the Plains to unite the tribes and guide them in another Great Migration to finally reunite with Mighty Or, the Great Father, at the Gates to His realm. 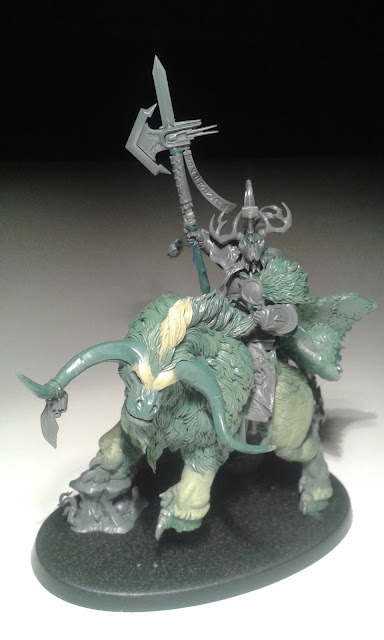 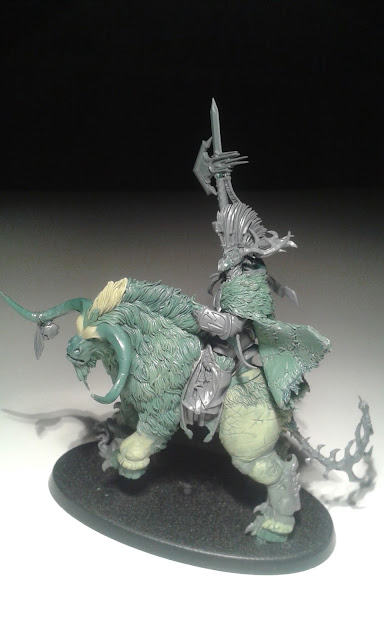 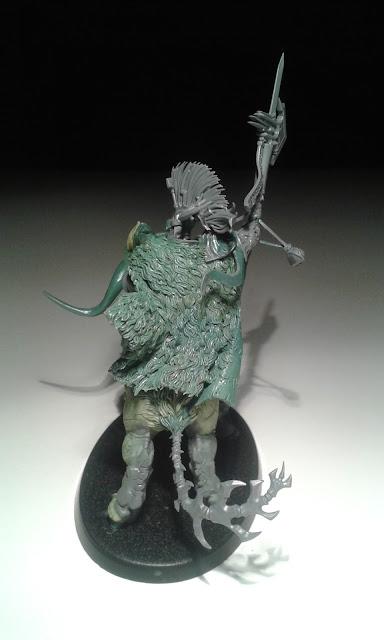 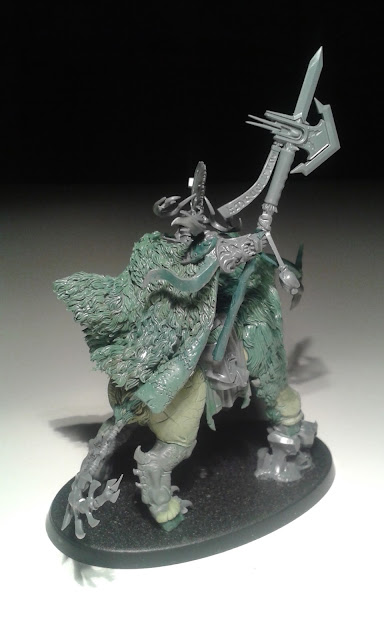 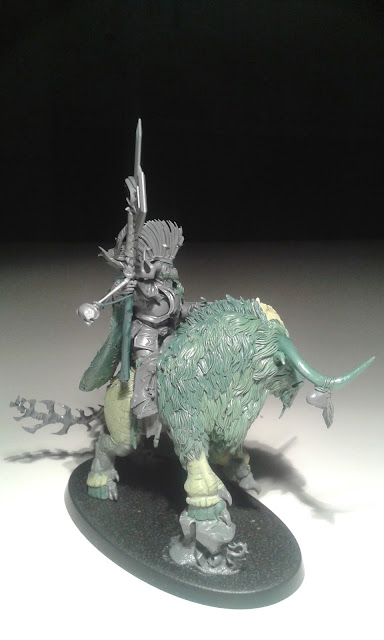 Finally, after almost one month, I can call the Wandering King done!
It has been a really difficult project, probably it would have been easier to sculpt it from scratch, but to see him done and finished is a great satisfaction!
As always there are a lot of things that I'd love to add, ideas remained undeveloped and some bits which I am not too happy with, but there comes a moment when one has to stop and just be able to consider his job done at this point. The King is just one member of a warband I am planning to build around him, and since my hobby time is limited lately I really need to progress with the rest of the band and on other projects as well.

Now, about the whole project:
the idea of building a primitive warband for Age of Sigmar came to me when I first heard about the background of the setting... The theme of the avenger-god coming back to the lands of his worshippers after centuries of abandonment was, to me, very interesting and full of possibilities!
Of course I soon found out that GW was not handling the story in the way I would, so I decided to give a go to the idea I first had when I read the fluff in the wd: a band of hunters of the mortal realm of Ghur guided by a sort of Prometheus version of a Stormcast, a forgotten warrior of the heavens whose rebellious behavior made him an outcast and a renegade.
The story of the campaign will revolve around the deeds of the Wandering King who is trying to guide his mortal followers to the Realmgate of Azyr, deep in the lands of their enemies, to open it and finally unleash the fury of the stormcast legions upon Ghur. His "army" will consist of the mortal tribes he united (hunters and primitive warriors who forgot the secret to forge weapons and fight almost as the beasts they hunt in the Plains) and shaggy beasts of the wilds who bowed to his titanic will.
He is not a glorious hero though, the long year spent as an outcast made him a desperate and brutal individual, whose only ambition is to regain the favor of his God and bring His punishment upon his enemies. He believes that the time is right but he acts without Sigmar's (Or's) consent and his actions will risk to compromise the God-King's plans for his coming Age of vengeance.

I have interesting plans for developing my warband, and I know it will require time and energies before it's done, but I am confident that with a bit of patience and possibly some help and support from you guys, I will take this project to his rightful finale before the end of next year!