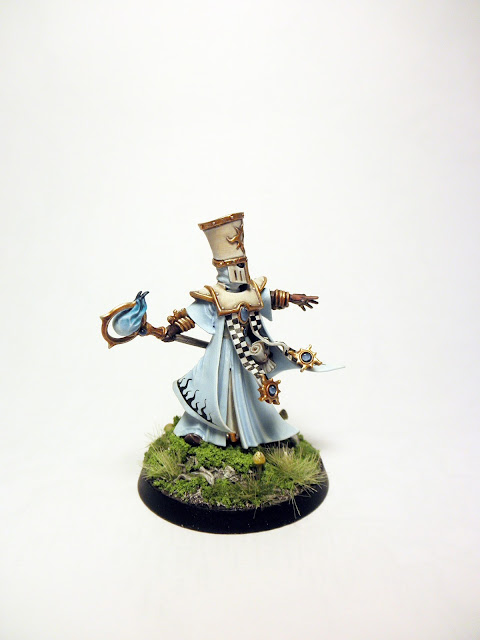 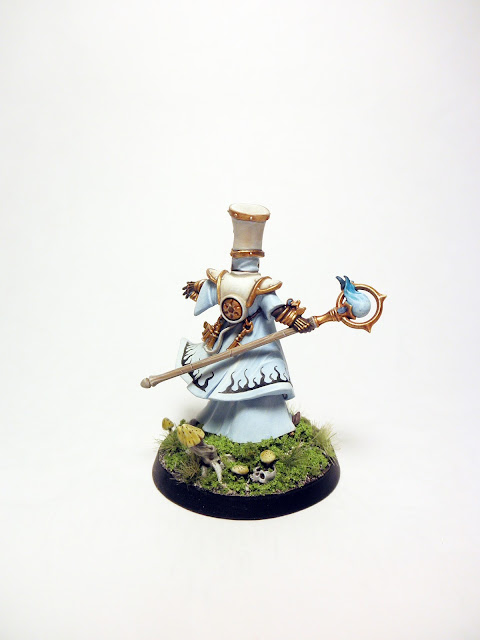 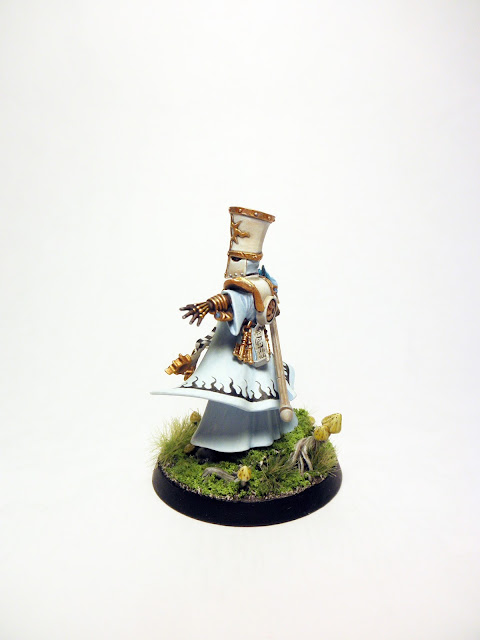 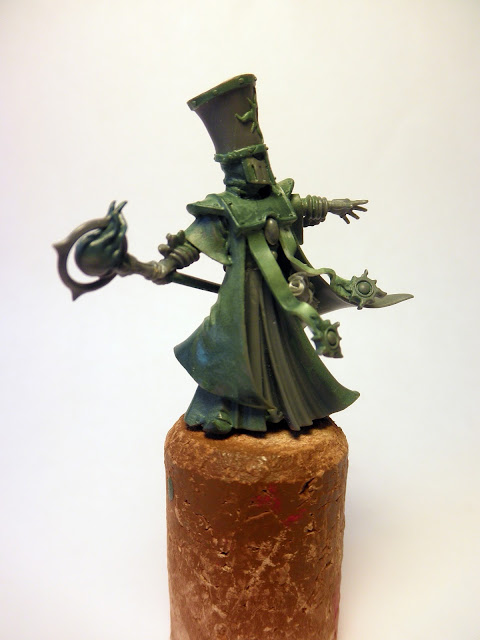 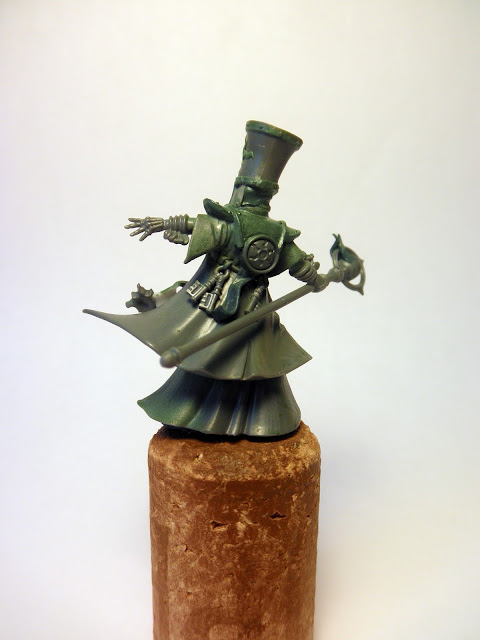 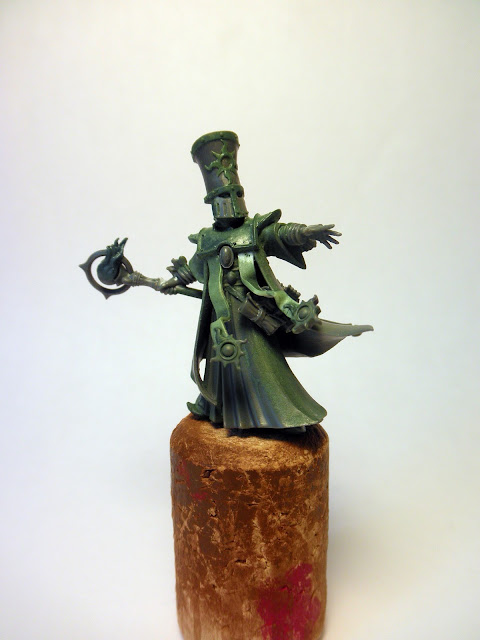 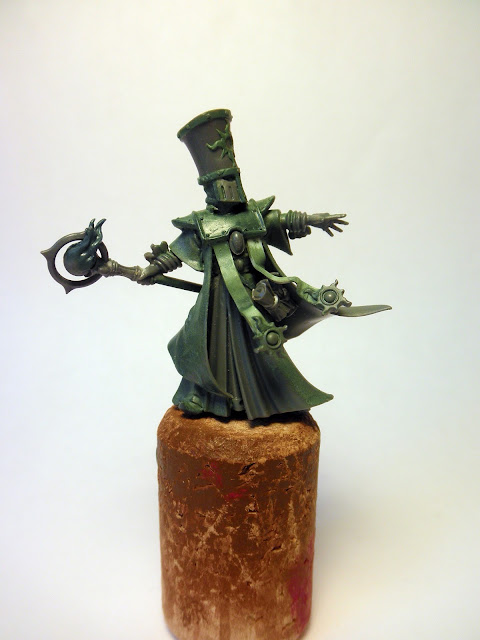 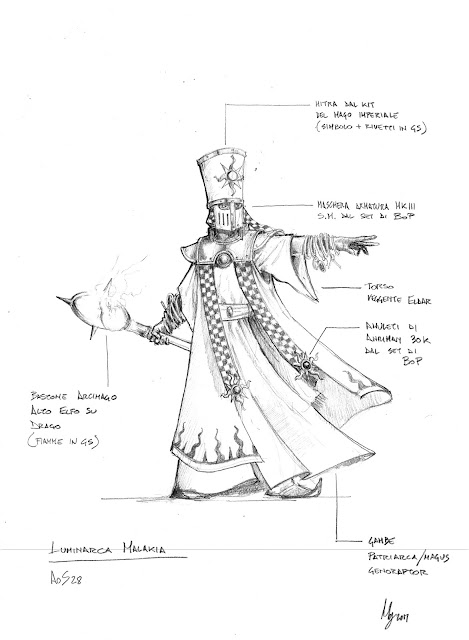 The Alluminarch, Abbot and High Lord of Anaryn, spiritual and militar leader of the Alluminarchate is finally completed!

This model took me some time, between converting and painting I have bee working on him for almost a month, but in the end I am really pleased with the result, a suitably imposing model and a fitting leader for my warband.
The conversion was aimed at creating a mini that blurred as much as possible the line between the archetypal cleric, warlock and warrior... As I imagined him he should embody the spiritual, martial and eldritch aspect of the Alluminarchate and to achieve this on a single model was quite a challenge.
As for the rest of my warband I painted him in a very simple, almost bichrome palette of cream and light blue whites, using gold trims and blue gems to bring it to life.

The base was again quite challenging... I envisioned Anaryn as a strange land filled with the magical wind of light and based it on the illustration of the Shamutanti Hills by John Blanche, one I was particularly fond of since my childhood. I really liked the overgrown mushrooms and mossy rocky outcrops, really in line with my vision of Anaryn, so I set up to create a base that screamed "warhammer" as much as possible with a touch of old school and a hint to the High Fantasy settings of Moorcock's Elric. It took me several hours to complete it as I had to sculpt mushroom caps, roots and rocks, but I feel happy about the outcome.

What do you guys think?

[I just edited this post to show some WIP pictures of the Alluminarch as some of you have asked for them. The pics are not great unfortunately but they should give an understanding of the process... I started with a sketch, as usual, then moved on to collecting the bits I identified. In this case I used the legs of a Genestealer Magus, torso and arms from the Eldar Farseer, the staff from the  HE Archmage on dragon. The head was the most challenging, combining the tall hat of an Empire Battle Mage, the head of a Bretonnian Man-at-arm and the iron mask of a MKIII marine from Burning of Prospero (plus the usual trims in GS). The stoles hanging from his chest piece (sculpted in GS to resemble the one of the Skitarii Princeps I used for the rest of my warriors) were done in plasticard bent to shape using the heat of a candle to which I glued two sun symbols  taken from 30k Ahriman  (I actually had to buy 2 of the models to get these bits... Don't judge me, it was worthy!).
All in all it was a quite complex conversion, but I really enjoyed the process of creating a new aesthetic but keeping it in line with GW spirit and bits.
To make something like this is very important to plan ahead of starting with your tools, I find that sketching really helps me putting together ideas while I surf the web for interesting bits.
I hope this was useful!]