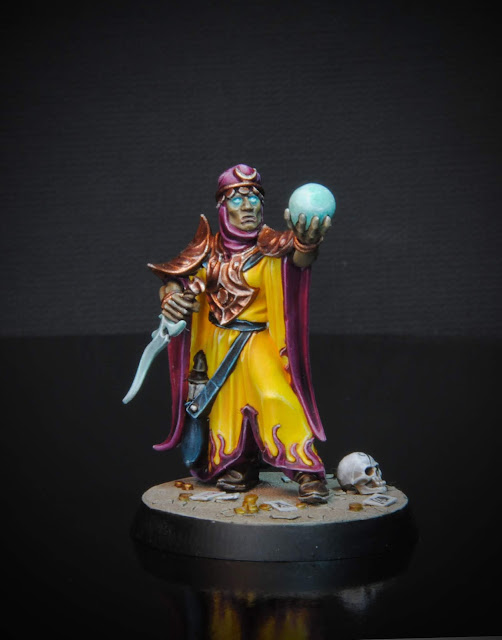 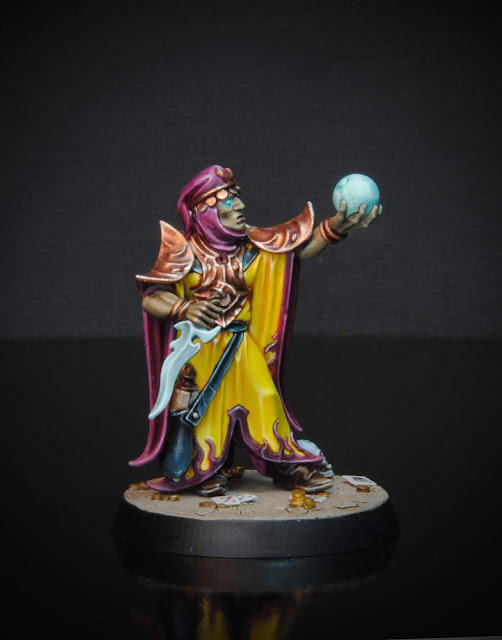 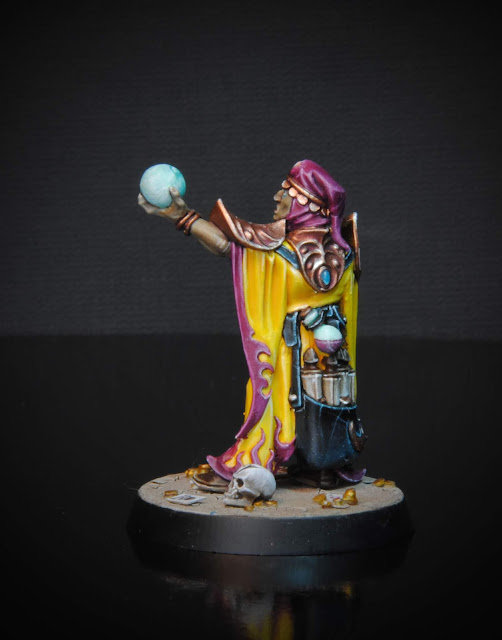 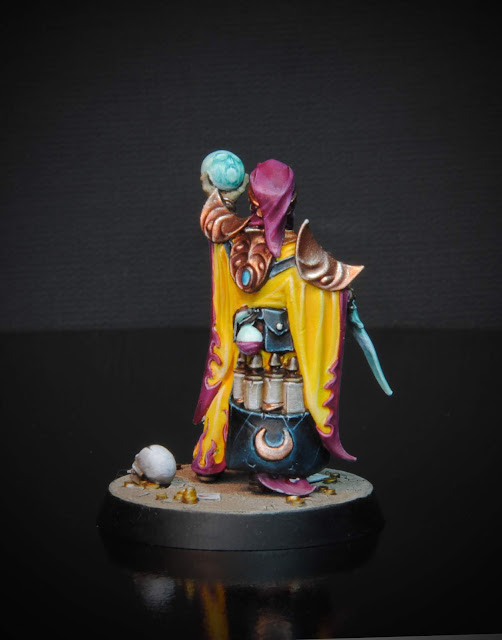 The second model for my warband is now up on the blog des Kouzes for day 8 to the advent calendar!

Members of the caravan who can trace their lineage directly back to the mirrored city of Shadespire are known as Babus, an ancient title used by the patriarchs of that once mighty kingdom.
Raghul is one of the elders of the Caravan, his wisdom and advise often sought by the Queen of Crescents on matters of diplomacy and conflict. He has travelled across all the Eight Realms and he is said to once have set foot on the Realm of Chaos itself . Children and adults alike are always eager to hear his tall tales around campfires, often wondering how much of them is true and what has been crafted by the compelling imagination of this master storyteller. His status among his peers though comes not just from his own talents and ascendancy for he is also the keeper of the Orb of Echoes. This relic from Shysh was forged from Shadeglass and within it are contained the souls of the original founders of the Caravan, the Katophranes who managed to escape the wrath of Nagash. By looking into it Baba Raghul is capable of communicating with the souls of these mighty warlocks who whisper secrets and share with him lost and ancient knowledge. Looking into the Orb is a dangerous task though, as opening the doors of the Underworld often means exposing oneself to the gaze of Nagash and his minions. 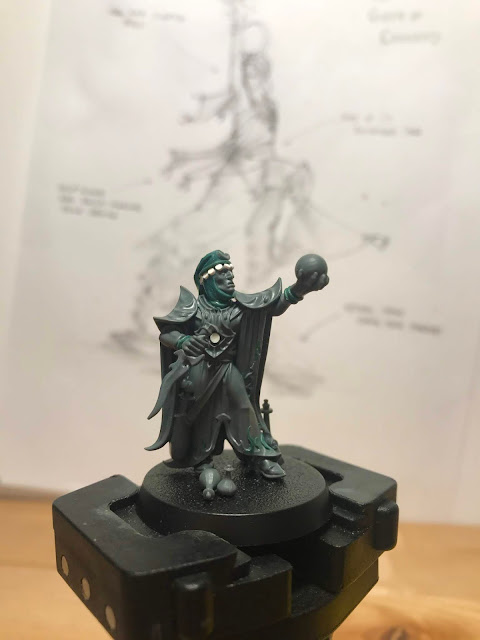 Baba Raghul, essentially a gipsy nobleman of the Age of Sigmar, was a fairly easy conversion but one I consider quite successful in changing the aesthetic of the base model: the Idoneth Soulscriber.
The inspiration for this particular piece (and some of the warband in general) comes from the art of Gary Chalk (Lone Wolf books) and tries to capture the very classic imagery of the eastern warlock from fairy tales. I found that the original artwork of Shadespire captured very well that exotic vibe and I based my conversions loosely on this image in particular. 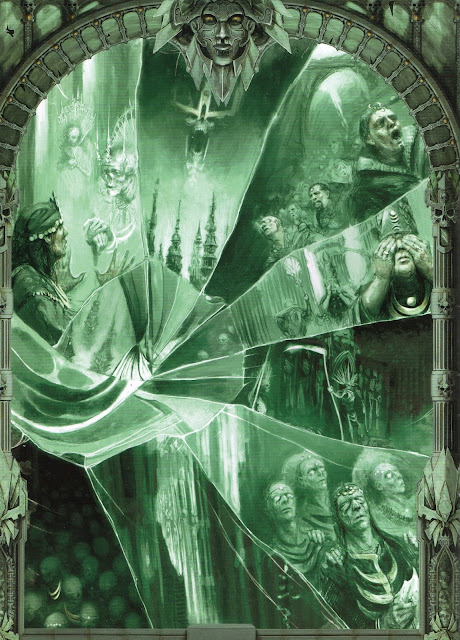 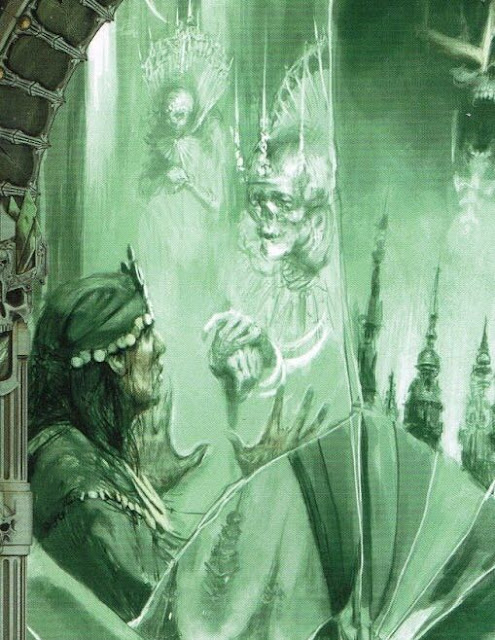 This was the starting point. I wanted to build a warband that expanded on that aesthetic and explored the background of Shadespire form the untold point of view of a group of descendants of survivors of Nagash' vengeance. 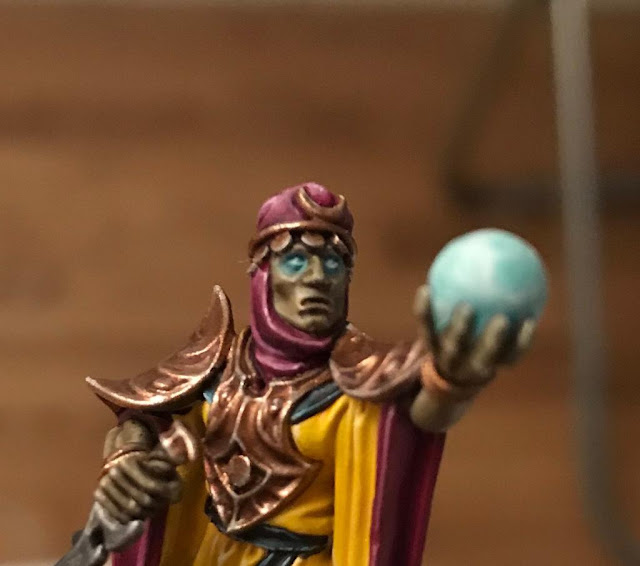 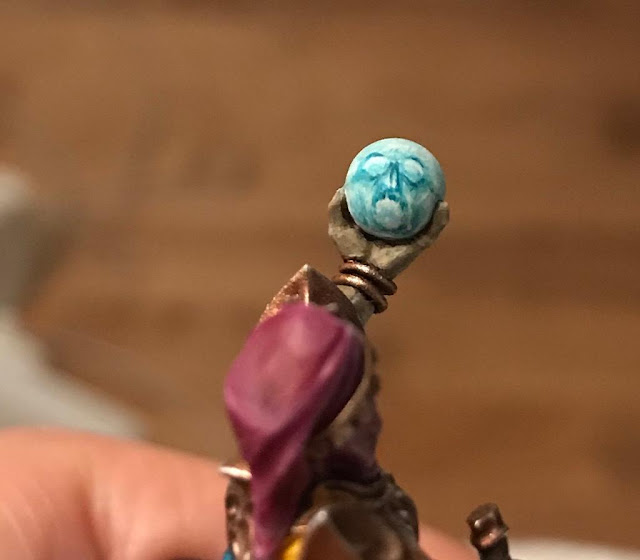 (Sorry for the atrocious close-ups)

The painting focused on creating a strong focal point in the globe, not an easy feat considering that I already used all the brightest colours on the rest of the model, so I had to take a slightly different approach: I decided to play with the interaction between his facial expression and whatever he was looking in the globe. The head I chose to use (from the Luminark acolytes) had an interesting worried expression, like he was looking at something scary, so I decided to play on it and create a sort of Peppin and the Palantir moment. The Fortune Teller is looking in the depths of the orb, trying to communicate with the spirits of his ancestors, when Nagash himself manages to sneak into the vision and freak the hell out of him!
Painting Nagash' angry face on the curved surface of the orb was definitely a challenge but the overall composition worked well in the end and this one is one of the pieces I am most happy with in my warband.