The Queen of Crescents 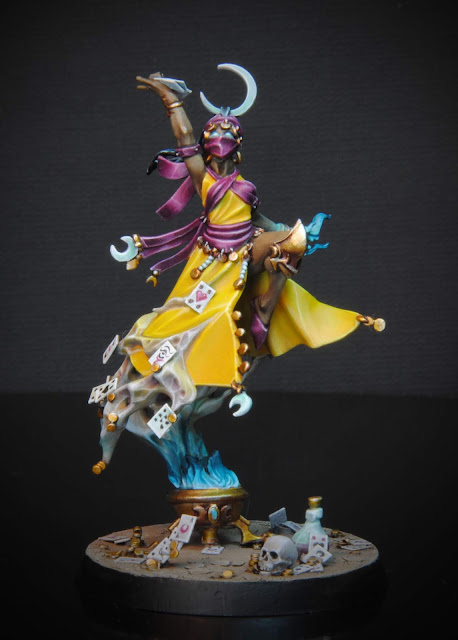 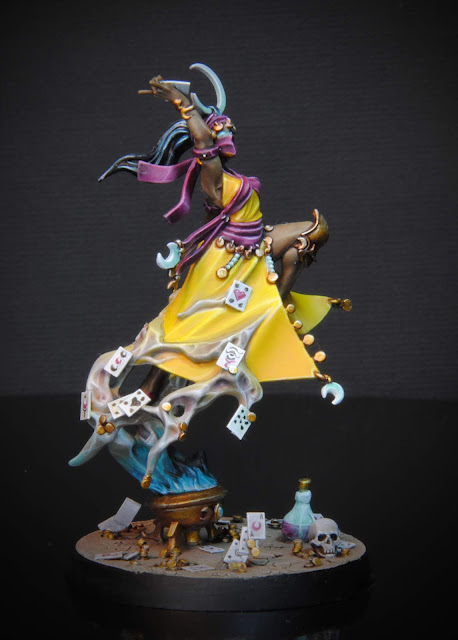 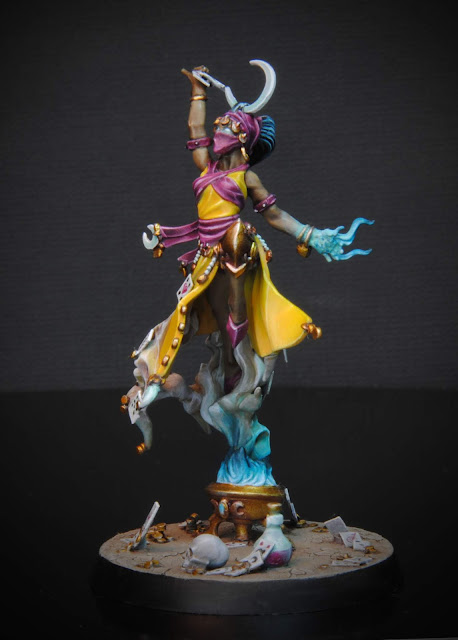 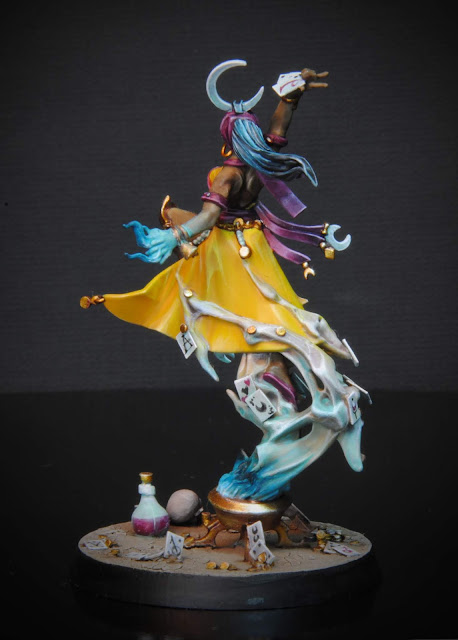 Ruling over the people of Caravan the mysterious entity known as the Queen of Crescents is said by her subjects to be the most powerful monarch of all the Realms as her kingdom stretches over a different horizon every dawn.
A mighty enchantress the Queen is a master of illusions, capable of confusing her enemies by manifesting swirling visions of their most intimate dreams and using half true prophecies to lure them to their doom. No man is immune to her seduction and many who now travel along with the Caravan are under the spell of her supernatural beauty, said to be part of the curse that Nagash cast upon her ancestors.
She is also the keeper of one of the most powerful relics of Shadespire: the ancient Oracle of Tauth, a deck of tarot cards said to be so imbued with the eldritch energies of Shysh that, if handled by the blood of the Katophranes, it is capable of unleashing the power of its divinations upon the enemies of the wielder.

The Queen of Crescents is where it all started. I had this idea for a conversion of a gipsy princess ever since I saw the wonderful Mistweaver Saih from Silver Tower. She had a ballet dancer pose, very dynamic and seductive. In fact I always thought that the more martial aspects of the model (the spikes coming out of her arms and armour) were a bit too much and distracted from the more elegant aspects of the sculpture.
Before starting to plan anything on the caravan and even before trying to define the aesthetic of the miniatures I prepared the sketch below for what was then supposed to be just a gypsy dancer. While I was drawing though I realised there was something quite imposing and interesting in the potential final result, so I gave her a suitably mysterious but imposing name and planned to make of her an important model of the group (though I had no idea what the others would be). 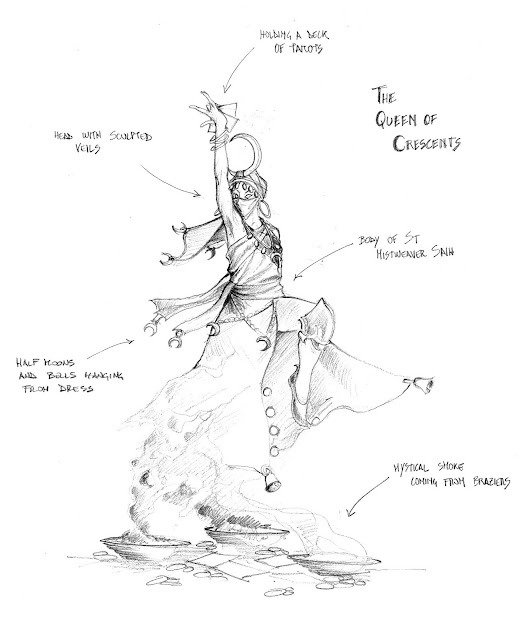 Then of course the conversion itself happened over the course of a feverish weekend. I just moved into my new place and I did not have a table nor a chair so I made the hole thing hunched over my kitchen sitting on a pile of suitcases, It did the job and I was instantly pleased with the conversion, so much so that I can honestly say I was seduced by it somehow. The Queen of Crescent became a very interesting experiment for me, I felt like it could become the beginning of a more experimental phase of my miniature work, though I had no idea how or what was so special about her... Just a personal sensation. 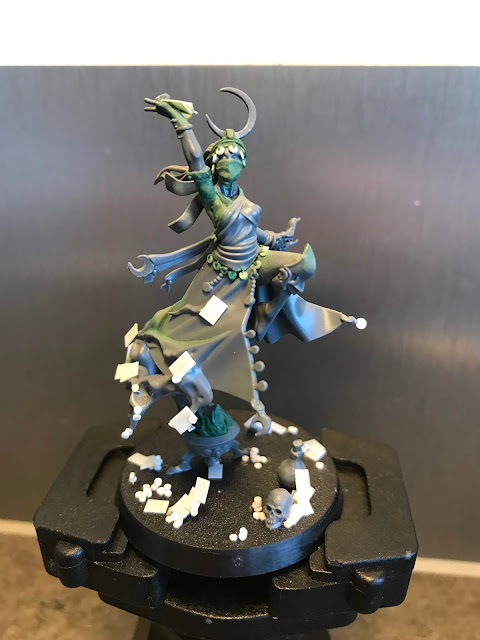 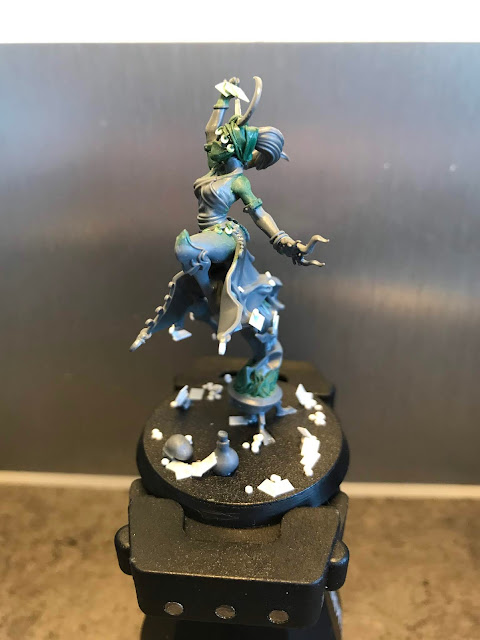 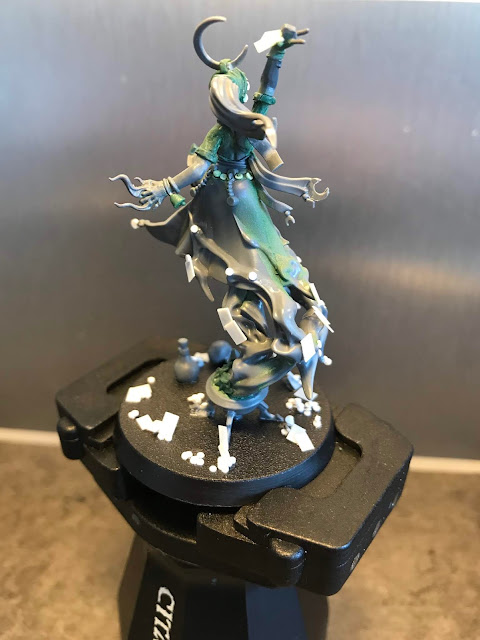 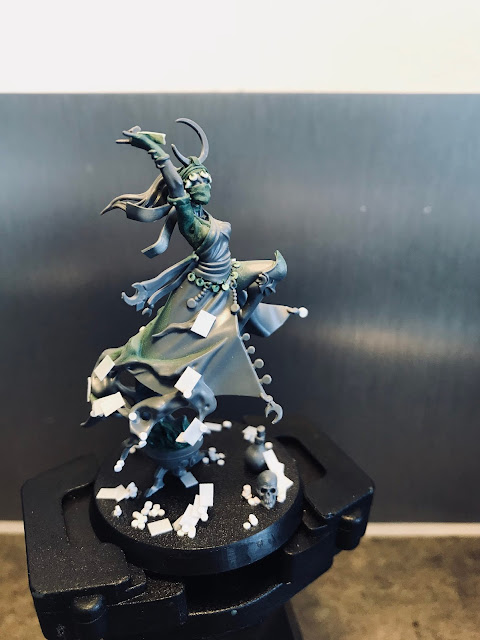 The conversion was not the easiest, I had to use quite a lot of small and fiddly components and resculpt some of the anatomy of the upper torso, but the most involved part, and what gave me the idea for the bases on the rest of the warband, was the billowing smoke and the brazier. I wanted to enhance the sense of movement and give a strong sense of setting to the piece, almost like a small diorama. There should have been action and that action should have involved the base somehow. The cards and coins flying around her just provide that sense of action, though of course I knew they would have been a pain to paint. They actually were the most enjoyable part of the model in the end!

That is it, my complete warband will be showcased on the 25 along with the rest of Les Kouzes works, although as I anticipated I am still working on this project and will have more to show you in the new year! For now let me just express once again my gratitude to all the guys at Les Kouzes and to Maxime in particular for having invited me to this fun ride all together. It was an amazing project to take part to and one which allowed me to experiment a bit with techniques and unusual colour schemes for a change.